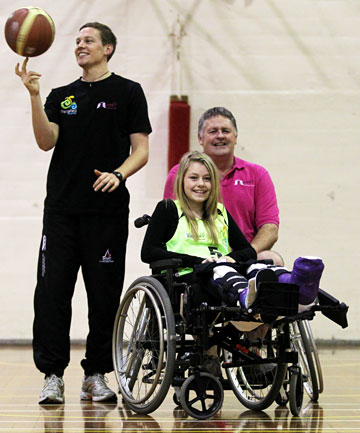 Hanna Moore likes wheelchair basketball for the freedom it gives her.

And being able to play kitted out in a new uniform has made the experience more exciting for Hanna.

The ParaFed Taranaki Youth Wheelchair Basketball team was presented with a set of personalised uniforms, including jerseys, warmup T-shirts and hoodies, valued about $1500, from the Mellowpuff Charitable Trust this week.

The trust will also be sponsoring the team for the next three years.

Hanna has cerebral palsy and said wheelchair basketball gave her the freedom to do a sport she “wouldn’t imagine doing”.

However, it will not be until October before Hanna would be back on the courts because she has just undergone an operation to both her legs.

Mum Anneke said Hanna was not one to let obstacles stop her from achieving her goals.

“It’ll take her a long time but she still completes it.”

Sport Taranaki sport development adviser Rob Haveswood said it was unusual for a team to receive a three-year sponsorship.

He said the monetary support would pay for the team’s accommodation and travel expenses.

The youth wheelchair basketball team started in 2013 and trains with the senior players at Francis Douglas Memorial College’s gym every Thursday.