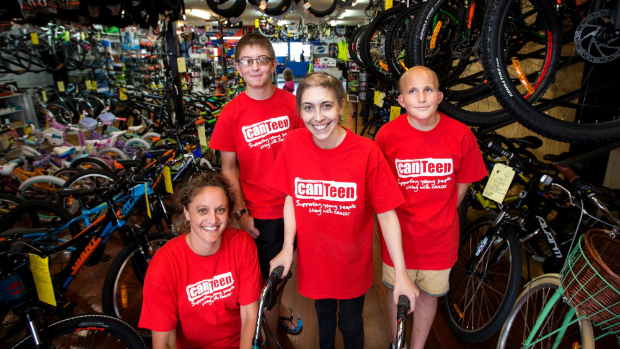 Logan Salisbury, 13, Rory Gardiner, 14, and 23-year-old Olivia Madgwick will all be playing their part for the CanTeen Taranaki team taking part in the 2017 Round the Mountain Cycle Challenge on January 28.

Salisbury and Gardiner will each ride a leg in the race, which has been a long time supporter of the CanTeen charity, while Madgwick will be providing support and positive energy for the participants.

Salisbury, 13, was diagnosed with Burkitt’s lymphoma, a form of Non-Hodgkin lymphoma, , when he was six but it’s been in remission for more than five years.

He has twice ridden the last two kilometres of the race before supporting his brother Matthew, who is also in this year’s team, but said he was keen to player a bigger part this year.

“I’ll be just trying to complete my leg without too many worries.”

Salisbury believed his battle with cancer had prepared him well for the challenge ahead.

“Against what I’ve already been through, I think it’ll be a breeze.”

Gardiner, 14, of Inglewood was diagnosed with brain cancer two days before his fifth birthday.

“I had my birthday in hospital.”

When it was first discovered he had cancer Gardiner admits he didn’t understand what was going on.

“I didn’t know what they were talking about but mum was crying and so was dad.”

Gardiner’s cancer has been in remission for seven years now and he had been preparing for the event for about three years.

“Me and my mother, we have been training since I was 11, doing bike rides,” he said.

“Hopefully I will go pretty well.”

His brother Sam, 17, is also taking part in the ride which has increased his confidence.

“It’s comforting because he’s done it before.”

Madgwick discovered she had brain cancer two years ago, by accident, after she fell over at a 21st birthday party.

“If it hadn’t have happened, I would’ve died,” she said.

While Madgwick’s cancer is in remission she is still using a walking frame and can’t take part this year, though she has high hopes of competing in the future using a special trike.

“It’s just really cool, I wish I could do bit I can’t just at the moment,” she said.

“When I get my trike I’m definitely going to do the around the mountain.”

Canteen support worker Alex Nash said it was great to see the trio taking part but it wasn’t unusual.

“They are always doing these kind of things,” Nash said.

Working with the kids for the last few years and seeing how positive they remained in the face of adversity had given Nash a new perspective on life.

“Now when I hear people with small issues complaining, I think get a real problem.

“You can’t put it into words, you are just so proud of them.”

Event organiser Selwyn Brown said having the kids take part in the event was an inspiration and it would give them a sense of pride and accomplishment.

“I just think it is really neat for these kids to do this stuff.”

Brown said the ride would challenge them and help build team spirit.

“They will get a lot of support from the hundreds of people involved. We want them to be part of the event.”

Donations for the team can be made at https://give.everydayhero.com/nz/canteen-round-the-mountain-cycle-challenge-taranaki