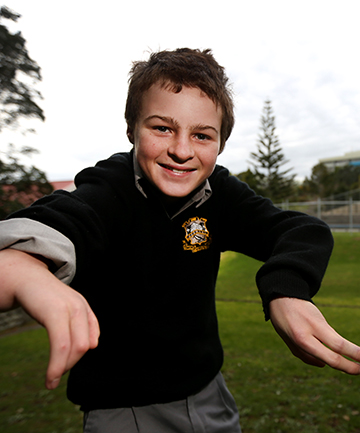 Anton Besseling swims like a fish despite his physical limitations.

The New Plymouth Boys’ High School student was born with Holt-Oram Syndrome, a condition characterised by skeletal abnormalities of the hands and arms, and he has just three fingers on each hand.

But that has not stopped Anton from making his mark in the swimming pool where, inspired by Paralympian swimmers Sophie Pascoe and Cameron Leslie, he hopes to one day represent New Zealand in breaststroke.

Anton said the breaststroke was not a difficult technique to master.

“Because of my arm disability, I can’t use my arms as much like in freestyle, so I rely on my legs most of all. That compensates for my arms,” the 14-year-old said.

Anton said he loved water as a toddler and started swimming competitively when he was about nine years old.

He trains three times a week, for up to two hours, with swim club Aquabladz New Plymouth at the Bell Block pools.

Swimming was a good way for Anton to relax after an “intense” day at school.

Anton has met both Pascoe and Leslie when he was going to his first national version of the Paralympics in 2009.

“I came out with two silvers,” he said.

Most recently, Anton won two gold medals, in the 200 metres breaststroke and 50m freestyle, at the Bay of Plenty Short Course Championships.

“I’m pretty stoked,” he said about the win.