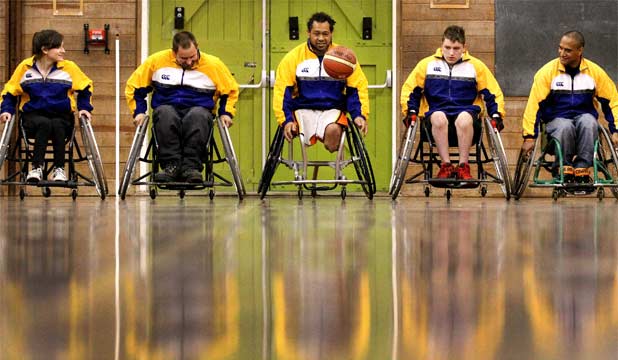 Taranaki will make their first appearance at the national wheelchair basketball championships at the weekend after a layoff of more than 20 years.

The Taranaki Rollers are aiming for a top-four finish in the second-tier of the championships in Wellington.

Co-coach Jake Mills said the Otago Panthers were the only mystery side in their six-team division.

“We have played four out of the five teams before so we are looking to try to improve,” he said.

His coaching partner Therese Campbell is more confident of success.

“We have a good chance of getting to the semifinals,” she said.

The team, made up of captain Ben Hekenui, Luke Leathers, Kirstie Fairhurst, Bregan Handgrove, Paul Salisbury and Malcolm Preston, has been playing in the New Plymouth social division against disabled players using wheelchairs.

The Rollers are hoping this experience will pay dividends in Wellington.

Campbell said the team still faced difficulties. Some players were using regular day chairs and they didn’t have enough specialised chairs to put two teams out on court at the same time.

“It makes it hard to practice as the team is playing against each other. It doesn’t get the team playing together as we can’t play five-on-five,” Campbell said.

Parafed Taranaki is fundraising for new chairs, customised for each player, at a cost of about $3500 per chair.

“We are trying to raise enough money to purchase customised basketball wheelchairs to have five-on-five games, so any donations are welcome,” Mills said.

New chairs would make the team more competitive at tournaments because other sides presently had the advantage of using customised chairs.

Anyone interested in getting involved in wheelchair basketball or wanting to make a donation can contact Mills at Sport Taranaki.