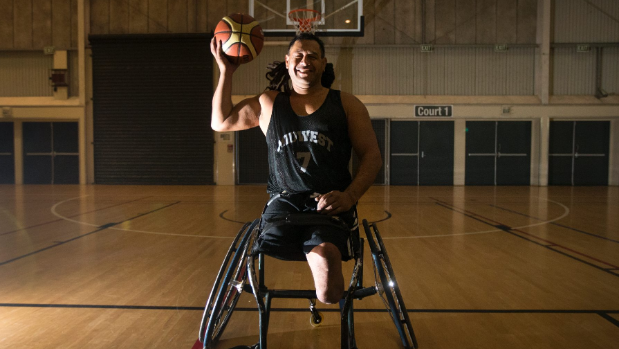 A national wheelchair basketball player has called for more people with disabilities to join the sport.

Taranaki’s sole New Zealand rep Ben Hekenui​ warmed up for the Oceania championships later in the year with a solid workout in the northern league tournament at New Plymouth on Saturday.Hekenui and his Mid West teammates were upset by Auckland 26-15 in a hard fought final at the TSB Stadium.
The Mid West team were top seeds at the weekend’s tournament which is played each month alternating between four centres – New Plymouth, Cambridge, Tauranga and Auckland.A shortage of players forced Taranaki to join Bay of Plenty to field a combined team.The Countdown meat assistant is the regions only national representative in the Roller Blacks side to travel to the Oceania championships in China in October.It will be Hekenui’s first experience at international competition although he had travelled twice to Sydney for the Slam Down Under championships, picking up the Master’s division team title.Hekenui encouraged those with a disability to try the sport out.The former rugby league and rugby union player had played wheelchair basketball for six seasons after losing both legs in an industrial accident nine years ago.
He had been in the national squad for the last four years.

“I enjoy the physical nature of wheelchair basketball, there’s a good amount of close contact in the games but also good sportsmanship both on and off the court,” he said.

“We’re getting more people involved but we always need more.

“It may not be for everyone but it’s worth coming along to see it suits you and there is a lot of support.”

He also cycled long distances, and had twice completed the final 44km leg from Pembroke Road, Stratford to New Plymouth in the annual Round the Mountain race.

“It’s quite a skilled sport to play, you need to be fit in the upper body.

“One of the hardest skills is being able to judge your speed as you approach the three-point line and shoot for goal,” he said.

“We need more referees and Taranaki basketball and the national body are focusing on training courses,” she said.