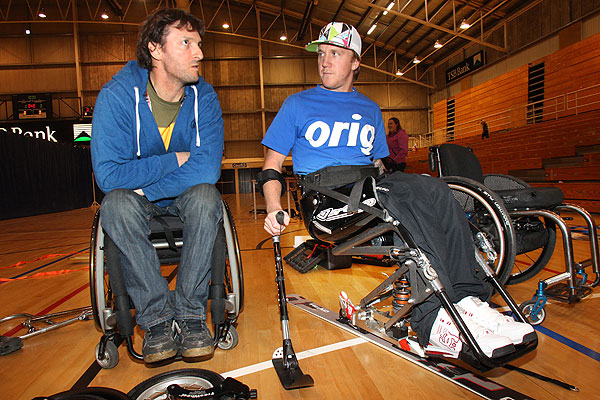 Eight years ago New Plymouth man Ian Rowe lost all sense of fear at the same time he lost the use of his legs in a mountain biking accident.

That absence of fear has helped him master the art of the sit-ski he demonstrated to other wheelchair users at the Disability Sport Expo at TSB Stadium last night.

The adaptive skier is soon off to Wanaka to the Cardrona Adaptive Snow Sports Festival where he will be competing despite just 11 days experience on his sit-ski.

An experienced snow boarder before his accident, Mr Rowe said the device gave back some of the freedom he lost from life in a chair.

“You still get the same rush from it that you would when you are boarding but it would be a lie to say you can go everywhere you used to.

“But you can go most places and it doesn’t matter about roads and footpaths. It’s a pretty awesome feeling when you are in a chair,” he said.

He had brought adapted snowboards and downhill skis as well as sit-skis. It was possible for almost everyone, regardless of disability, to use the adapted gear to get skiing, he said.

“If people can move their head, we can get them skiing independently.”