Blind rider on the road again thanks to Te Karaka Foundation 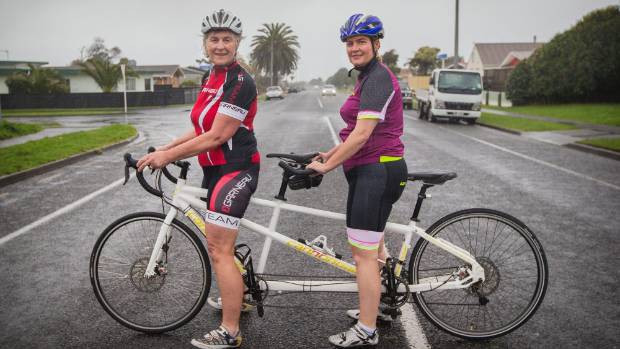 Riding a bicycle is a popular pastime that most people find a breeze.

But have you ever wondered how you plant your bicycle pedals to the metal on busy streets if you can’t see?

For New Plymouth’s Teena McEwen, who is legally blind, the answer is a bicycle made for two.

“I’m sure lots of people can’t imagine how frustrating it is not being able to take yourself off for a bike ride whenever you feel like it,” said McEwen.

McEwen said the specialist equipment she needed to ride a bike safely was out of her financial reach.

The mum in her mid-40s was born with limited eyesight, only seeing colours and unable to see anything while riding.  Despite her lack of vision she had always tried to follow her dreams.

When McEwen was 10 years old she saved her pocket money to buy a bike and taught herself to ride – against her parents’ wishes.

“I just wanted to be like everybody else but everyone said I wasn’t allowed to do it,” she said.

After one too many crashes into the neighbour’s fence McEwen put the brakes on bike riding.

Then fours ago, the Blind Foundation invited her to jump on a tandem bike and matched her with a pilot.  McEwen pedalled from the back as the pilot steered, changed gears, and described the terrain ahead.

Unfortunately McEwen was forced to put the brake on her free-wheeling passion once again when her well-used bike bit the dust due to wear and tear, and her pilot moved on.

It was almost deja vu to when she was 10. McEwen attempted to fund raise and save $6000 needed for a new bike.  She continued to ride on a borrowed bike with a new pilot, Jan Tyson, but ​sadly her fundraising endeavours hit a wall.

The duo spent nine months training for the Around the Mountain Cycle Challenge that took place last month.  Two days out from the event McEwen received news of a grant from the Taranaki charitable organisation Te Karaka Foundation.

The secondhand tandem bike she was borrowing was available to buy and McEwen combined the money she had raised, with that from the grant, to make the bike her own.

“It was awesome, they were fantastic and so supportive,” she said.

The tandem team went on to complete the half mountainous cycling challenge in high spirits.

“It was the longest ride I have ever done. It was neat to ride with other people, all of a sudden I was riding as part of a pack.”

Te Karaka Foundation chairman Ken Horner said they were only to happy to help.

“Thanks to a generous donor we’ve recently been able to distribute a number of grants to hearing and visually impaired people in Taranaki, which has been very rewarding.” he said.