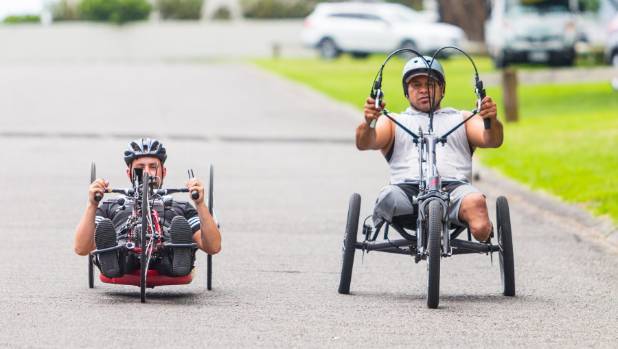 Jack Brown’s main focus for competing in his first around the mountain cycle challenge is to beat his best mate.

And he’ll be doing it on three wheels instead of two.

Ben Hekenui’s focus for the race is to stay fit for wheelchair basketball which he represents New Zealand in.

Both will be tackling the renowned cycle challenge in hand powered cycles after getting involved with Parafed Taranaki, an organisation that helps physically disabled people get active.

Jack is confined to a wheel chair and Ben is a double amputee.

Hekenui and Brown are two of more than 1100 people participating in the 150 kilometre around the mountain cycle challenge on Saturday.

“Parafed get us out there to have a go. They push our limits and open opportunities. I’ve done things I never would have thought to try,” Brown, 20, said.

For Hekenui, who lost his legs 10 years ago, this will be his fourth around the mountain challenge.

Brown, who had a car accident two years ago, said he was hesitant about entering at first.

“I thought it was a bit too soon to try the 150 kilometre by myself but my mate did it last year and I thought if he can do it I can do it.”

Being a part of different sports has helped Hekenui stay positive.

“I’ve done things to help me move on and achieve goals.”

For Brown it’s about the competition.

“My mate set the challenge with a time of 10 hours 24 minutes. I’m hoping to do it in seven and a half hours.”

Getting amongst different sports also provides them with a great social life.

“It’s always good to meet people in a similar situation. Me and Jack have different disabilities but it’s good to catch up,” Hekenui said.

“We have similar challenges at the end of the day,” Brown adds.

“We’re just striving for the same thing. To be happy and like everyone else.”